The Fraser Island dingo is thought to be the purest dingo strain in the whole of Australia. And if you choose to come glamping in QLD on Fraser Island with us then next to 75 mile beach, one of their favourite hangouts, you’re likely to see these beautiful animals trotting along the beach during your stay.

The Fraser Island dingo is an icon 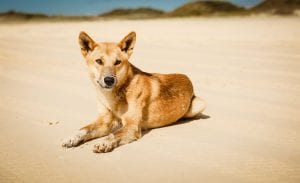 The number of Fraser Island dingoes is estimated to be between 100-200 living in around 19 packs spread throughout the island. They are one of the most iconic species in Australia and are up there in popularity with wolves and lions, other top predators which spark curiosity and wonder in equal measure. It’s a very positive sign that there are so many around, and because there are we have built a dingo proof fence around the whole resort so you’ll be well protected from any unwanted encounters with these gorgeous dogs.

They have a diverse diet which includes whale! 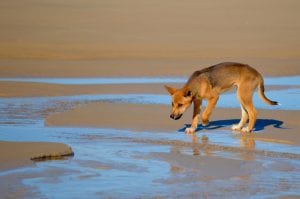 A recent study of over 2,000 dingo scats, 144 stomach samples and thousands of camera trap images found that these mighty carnivores dine on prey ranging from insects to fish and even whale meat from carcasses that wash ashore.

But it’s the stuff in between that make up the bulk of their diet.

Most commonly seen in the samples were the remains of northern brown bandicoots which were seen in nearly half, followed by fish which were found in just over a quarter and large skinks which were found in 11.5% of the samples. More interesting perhaps was the presence of feral pigs, feral horses, eastern grey kangaroos and the much threatened long-nose potoroos which tells us that even though they are rarely seen, these animals still live on the island.

How we can protect their future 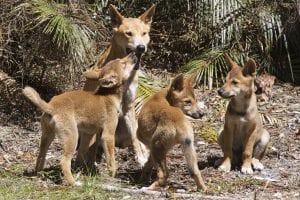 Getting to see the Fraser Island dingo in its natural habitat is one of the best free things to do on Fraser Island, and when you stay with us you’ll also learn more about how we can all protect them.

And the old saying of “a fed dingo is a dead dingo” still has some truth to it.

One of the first things you’ll be told is never to feed a Fraser Island dingo if you see one. Besides, it’s not like they’re going hungry, right?

The next piece of advice is to keep your distance.

Obviously if you do see a pack or a lone dingo wandering the beach it’s an awe inspiring sight, and taking photos of these beautiful animals is totally fine and encouraged. But getting too close is bad for both parties, so if you do see a dingo, keep a good distance and put away any food you might have.

Visitors fall in love with these beautiful, wild and powerful predators and they are as iconic as the island itself. Stay with us and see them for yourself from 13th June!