Sharks have suffered a particularly bad rap this year. Fraser Island sharks include great whites and tiger sharks, which live in the waters just off shore. Despite their fearsome reputation, having a large number of sharks in the ocean is a good thing. Vital in fact. These apex predators help to keep the delicate balance of marine life in check.

Sharks are not just killing machines

The number of deadly shark attacks worldwide is very small. Especially when you take into account the more than 100 million sharks which are thought to be killed by us each year. Sharks are intelligent, generally non-aggressive creatures who are far more likely to make a sharp exit upon encountering a human than going in for the kill. That’s not to say Fraser Island sharks are friendly – you definitely don’t want to be heading in for a swim off the beach any time soon – but that doesn’t mean we shouldn’t appreciate the beauty and importance of these majestic animals, and fight for their future and protection.

Humans are hunting sharks into near extinction 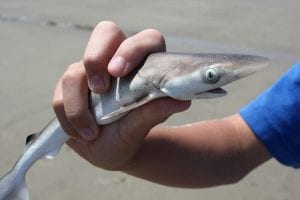 Sharks are apex predators, and their position at the top of the marine food chain means they are responsible for keeping everything in check so that no one species ever overtakes the rest. Despite their importance to the health of marine eco-systems worldwide, they are being continually killed with little restrictions or laws in place to protect them. They reproduce slowly meaning any that are fished are not readily replaced, for many species the rate of removal is far greater than their ability to replace themselves. In short, sharks deserve our respect and protection and the chance to see them in the wild is becoming more and more rare.

The good news is that the Fraser Island sharks are thriving. The Great Sandy Marine Park which stretches from Double Island Point in the south covers much of the waters around Fraser Island. This means protection for the sharks. It’s easy to see Fraser Island sharks cruising the waters just offshore from any vantage point high enough to get a good view of the ocean. They cruise and congregate in great numbers. Species regularly seen include the great white, tiger, small hammerheads and bull sharks.

Sharks are vital to the health of our oceans worldwide and seeing them in the wild and in such plentiful numbers is just one more reason why Fraser Island is one of the best places in Australia to spot wildlife. Learn more about these misunderstood animals from our friendly team when you stay with us here at the best Fraser Island accommodation on the island!